Join us for the upcoming Lunch & Learn Meeting of the Nebraska Agribusiness Club on February 4th, 2013 at the Lancaster Extension Education Center, 444 Cherrycreek Road in Lincoln.

The new Dean of Extension from UNL, Chuck Hibberd, will be speaking. Buffet lunch will begin at 11:30 a.m., with the program starting at 12:20 p.m. Meeting registration, which includes lunch, is $10 per person (unless you have already paid for the inclusive membership).

Hibberd is a Lexington, Neb. native and UNL graduate. He was named Dean of Extension after being director of Extension and associate dean of agriculture at Purdue University since 2007. Previously, he was director of the Panhandle center at Scottsbluff for 13 years.

Hibberd received his bachelor’s degree in agriculture, with an animal science major and his master’s and Ph.D. degrees from Oklahoma State University in animal science and animal nutrition, respectively. He was a faculty member at OSU from 1982-94.

The Nebraska Agribusiness Club is invited to attend the Governor’s Ag Conference is Feb. 12-13 at the Younes Conference Center in Kearney.

Former U.S. Treasury Secretary Henry M. Paulson Jr. will speak at the 25th Annual Governor’s Ag Conference, to be held Feb. 12-13 in Kearney. Nebraska Agriculture Director Greg Ibach said today that Paulson, who now chairs The Paulson Institute at the University of Chicago, will participate in a dialogue with Governor Dave Heineman about the future of U.S. economic competitiveness, the role of foreign investment in generating opportunities for Nebraska, and the prospects for enhanced trade and investment with China, in particular.

The Nebraska Department of Agriculture is still accepting registrations to the Conference, with early deadline set for Jan. 29. Those interested in attending can register by calling NDA toll-free at (800) 831-0550 or by going online at http://www.agr.ne.gov. 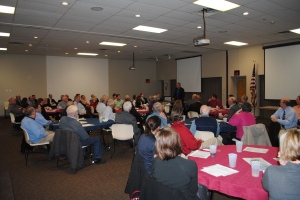 The Nebraska Agribusiness Club welcomed a large crowd of over 60 members and guests Monday, January 7th first “Lunch-n-Learn” meeting of the year.

Senator Tom Carlson gave a legislative update to the club about issues for the upcoming Legislature that include: a two-year budget, 1/4% sales tax for roads, state aid for schools, and water & ag issues. Specific bills that will be coming before the Ag Committee are:

You can watch the Senator’s talk on our YouTube channel, or by clicking play below.

The UNL Agribusiness Club will be having a meeting on January 23rd and would like to invite the Nebraska Agribusiness Club members to join them at for a networking social. Food & drink will be provided and there is NO COST for this social.

Please RSVP so we know numbers attending to provide food and drinks. Thanks!

Master Conservation Nominations are due Feb. 19

A winner will be selected from each of the three established categories: agriculture, community and youth. Production agriculture includes individual producers, partnerships, and family farm or ranch corporations. The community category is for groups, individual agencies or businesses that have carried out a water and/or soil conservation program for a minimum of two years. The youth category seeks to recognize any individual or group of individuals 19 years of age or younger for their conservation efforts.

Master Conservationist brochures, which include details on the program, are available at local Natural Resources District and USDA Natural Resources Conservation Service offices. Applications can also be found online by visiting www.owh.com and clicking on “In the Community” link. Entries are due February 1, 2013.

All entries are judged by members of the Nebraska Association of Resources Districts, USDA Natural Resources Conservation Service and the Institute of Agriculture and Natural Resources at the University of Nebraska-Lincoln. Master Conservationists will be recognized at the annual banquet of the Nebraska Association of Resources Districts, September 23, 2013, at the Younes Conference Centre in Kearney. They will also be featured in the Omaha World Herald in September.

The Master Conservationist program is sponsored by the Omaha World-Herald and the Institute of Agriculture and Natural Resources at UNL.

New officers for a new year

Nappy New Year! We’d like to introduce you to the 2013 Nebraska Agribusiness Club officer team.

Stepping into the President role from President-Elect is Mat Habrock. Mat works as the Field Services Director for the Nebraska Corn Growers Association (NeCGA).  NeCGA is a membership-based organization striving to improve Nebraska’s corn industry through leadership development, advocacy and education.  Mat received a bachelor’s degree in Agribusiness with an emphasis in Political Science from the University of Nebraska – Lincoln.

Going from Vice President to President-Elect is Jeff Monhollon. Jeff is a Farm Manager with Farmers National Company.  Farmers National Company provides various Real Estate Services to absentee landowners. Jeff has been very active in the American Society of Farm Managers and Rural Appraisers (ASFMRA).  He has served as Nebraska State Chapter President, served on several committees and is currently serving on a National Committee.  Jeff is a graduate of Kansas State University with a degree in Animal Science.  He also has graduated from the Nebraska LEAD Program.

New to the officer team is Kim Clark in the Vice President position. Kim is the Director of Biofuels Development for the Nebraska Corn Board where her primary responsibilities include programming, promotion and education of biofuels, specifically ethanol, to school children, consumers and retailers. She earned her bachelor of science degree in Animal Science and a master’s of agriculture with a minor in Agriculture Economics from the University of Nebraska-Lincoln. She plays an active role in her local church serving on several committees and volunteers as a religious education teacher.

Staying in the same role as Secretary is Dayle Williamson. Dayle retired as  United States Senator Ben Nelson’s Greater Nebraska District Manager at the end of Senator Nelson’s term on January 2, 2013. He joined Senator Nelson’s staff in 2001. Prior to that time he was appointed by a several Nebraska Governors to serve as the Director of the Nebraska Natural Resources Commission. He served as an agency director for 30 years. Dayle began his agricultural career with the University of Nebraska Agricultural Extension Service serving as a county agent. After graduating from the University of Nebraska, Williamson spent two years in the United States Army, and spent the next 30 years in his military career as a member of the Nebraska Army National Guard, reaching the rank of Brigadier General before retiring. Dayle has been a member of the Nebraska Agribusiness Club from the early days of the organization.

Also staying in the same officer position of Treasurer is Gerri Monahan. Gerri is the Business Manager for the Nebraska Ethanol Board. Originally from Hyannis, Nebraska, Gerri received her degree from the University of Nebraska-Lincoln in Emphasis Advertising and General Agriculture Certificate. She is a Nebraska LEAD 31 fellow, involved with the Lancaster Election Board, Christ United Methodist Church, Fairacres Homeowners Association, an auxiliary member of Saint Elizabeth Regional Medical Center and SHARE – a volunteer-run community-based nutrition distribution program.

Welcome to the Nebraska Agribusiness Club page! Please use this site to find out information about our upcoming meetings and events, preview past award winners, and learn more about agribusiness in Nebraska.